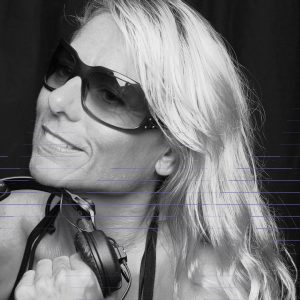 ON AIR: PARADIGM DEEP SESSIONS 1st Tuesday / month 9:00 PM – 10:00 PM (CET)
Each life has its own soundtrack. Miss Disks compilation started already in Ibiza. Hailing from Germany and living partially on the white isle for the past 20 years, it comes to no surprise that Miss Disk´s influences have been numerous. So moving on from the dancefloor to the dj booth was nothing more than natural progression. It’s been successful too. Miss Disk’s talent and ability to seamlessly mix an extraordinary range of progressive, deep & techhouse beats didn’t go unnoticed.
As a “newcomer” she was discovered by several international radiostations with a great feedback. Miss Disk played her quality dance music sets in Europe and influential clubs such as km5, Blue Marlin and El Divino and many more. She played as well on Ibiza’s infamous Villa Parties with Carl Cox. “Paradigm Deep Sessions” is her brand and was founded in 2010 as a co-hosting deep house project with her friend & producer Zach DeVincent (Los Angeles) broadcasted on Frisky radio.
In 2012, Miss Disk already being A & R manager of the Denver (USA) based label deep house label 5andDime recordings, she joined forces wih her musical soulmate, producer and life partner Helly Larson. She started her own as well as joint deep house productions released on DeepClass Records, DeepWit Recordings, Ready Mix Recordings and some more.
After taking a break due to the death of her life and musical partner, Miss Disk is returning on stage and into the music business.
As an expert in deep/tech “Paradigm Deep Sessions” will serving up the finest blend up of deep/techhouse on IbizaLiveRadio