At more than 1000 meters of altitude and surrounded by the stunning views of the Magic Mountains, GOAT Community celebrates its Opening Party of 2022. For the first time without restrictions and with an absolutely talented lineup:

Their events combine all the requirements to spend the most unforgettable afternoons and nights: beautiful natural surroundings, the best electronic music DJs and Producers and incredible people connecting and enjoying life.

We are very happy to broadcast this wonderful event on IBIZA LIVE RADIO.

XINOBI is a part of a generation that grew up within the music-blog eruption fuelled by Do It Yourself ethics. In 2017 he released his sophomore album ‘On The Quiet’ up-fronted by the lead hit-single ‘Far Away Place’. The album is a dance floor-focused story about the transition of many electronic musicians from punk rock and skateboarding into house music and about how dance music can be a field for social conscious awareness.
2018 saw him grow his catalog with releases on Anjunadeep, and MoBlack, as well as releasing various ‘On The Quiet’ remix EP’s, including yet another hit version of his biggest single, this time remixed by the hugely influential Rampa. Remixes, edits and reworks for artists such as Tensnake, Sbtrkt, The Avener, John Grant, Toro Y Moi,
Nicolas Jaar, Riva Starr, Agnes Obel, Moullinex and Kris Menace just prove Bruno’s ability to rearrange amazing music into a whole new universe.
Xinobi started 2019 with ‘Fado Para Esta Noite’, a wonderful collaboration with Gisela João, proving that Electronic Music and Fado can, and in this case should, go hand in hand. And the year went on with great things as he released a couple of very special collaborations: ‘Criaturas’ with Mexican DJ and producer Mystery Affair and ‘AZUL’ with long-time bud Moullinex.
Despite Xinobi’s appetite for devouring various genres, there is a unique watermark and consistency to his output, due not least to his musical and arrangement-based skills. Together with his friends and work partners Moullinex and Mr. Mitsuhirato he gave birth to the ever-growing label Discotexas.

MAHFOUD
Paint the colour of music on the sheet of silence. It is not what you hear but what remains hidden.
Marc Mâhfoud is a vocalist, lyricist, multi-instrumentalist, composer, singer, international live act DJ and producer.
In 1992, Marc’s parents migrated from Syria to Germany, where he spent most of his childhood and youth. Whilst visiting high school, Marc deepened his interest and education in classical guitar. After graduating from Bonn in 2009, he moved to the Netherlands to study Social Sciences at Maastricht University. This enabled Marc to couple his continually intensifying passion for art and music with multidimensional perspectives.
Marc musically meanders between electronic, cinematic, (pitched down) dance music, soundscape and jazz. He plays piano, synthesizers, guitars and other instruments that create sonic vibration. His recent collaborations with Yamaha Music prove a rare musical versatility, both as composer and instrumentalist.
Marc released on top labels such as DIYNAMIC MUSIC and Get Physical Music. His latest development attempts to liaise (social) science and sound into an honest fusion of traditional instruments and electronically driven compositions.
Even though his idea of sound is perpetually changing, he safeguards the impulse of constant reinvention and critical thinking. For that life is a journey and every encounter is a new paradise.

OHXALA
Ohxala is the musical project of Maria & Luis. The Portuguese duo explores a thematic cut with focus on Iberic, Brazilian and African cultures. Inspired by the strong foundation of popular and ancient rhythms, their music is full of field recordings, blending traditional ethnic folk elements with contemporary electronic music. They love to create an atmosphere where you can dance, smile, and feel free.

JOHN WOODS
Aka João Nuno Silva started mixing at the early age of 17 years old in his hometown, São Pedro do Sul, Portugal.
Since then, he got involved in all kinds of electronic music activities from DJ to event production. “Reborn” was his first event production agency in Lisbon.
In 2017 he got invited to be the resident DJ for W Hotels in Dubai & Qatar. In 2018 he moved to Barcelona and after playing in the most renowned clubs and promoters he got the opportunity to be a Resident DJ at Amnesia and Cova Santa in Ibiza. In 2020 he joined forces with 3 hometown friends and founded GOAT Community, an exciting and growing project in the Magic Mountains.
His last tours were in Mexico and the USA where he played on some of the most hyped events and places like BOHO in Vagalume Tulum, IT Tulum, Dinsmoor, and Supra in CDMX. In Miami, he played for Soundctuary along with Monolink, Astra, Do Not Sit on the Furniture, Copal at Joia Beach, and many more. In New York City he performed for Deep RootTribe and Palo Santo Tribe.
John Woods is the embodiment of everything that has happened to him until this moment. A life full of experiences, various human relationships, a growing passion for music, and most of all, a life led by emotions. As a result, his sound is a mirror of his journey.
Viva la Música! 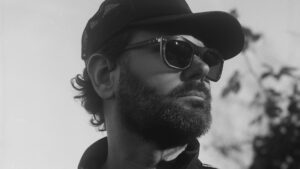